In 1960 on a dark stormy night a freighter was washed ashore on the Island of Inisheer (Inis Oírr). The Islanders quickly gathered to the wreck to rescue those on board and to salvage what they could from the battering sea. The ship carried many goods that were never before seen on the island, including biscuits, cookies, and even modern day toilets. Pieces, Wheels, Compasses, and various parts of the Ship were taken by many as souvenirs and reminders of the rare event.

The Ship Wreck is perhaps most well-known for its appearance in the opening credits of the wildly popular BBC series, Father Ted. The series is a comedy which follows the parochial life a Priest and his company in Rural Ireland. A series that was filmed in many areas of County Clare and is celebrated throughout the year with several Father Ted Festivals on Inis Mór, and in Kilfenora, County Clare. 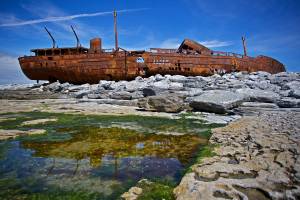 The winter of 2013-2014 brought some of the largest storms and tides to Ireland that has been seen in many years. The Aran Islands along with many other local areas did not escape without damage. Stone walls were knocked clean down, large sea stones were carried in by raging waters onto the coast lines of the Aran Islands. The islanders have worked hard to rebuild their walls and repair the damage of this winter. The Plassey Ship Wreck on the whole survived the storms, but was left semi broken in her mid-section. She is a powerful reminder to the Aran Islands of the power of the sea.

The Plassey Shipwreck is located on the Eastern side of Inisheer (Inis Oírr). After departing the ferry you would walk to the left at the end of the Pier to reach the Shipwreck. It is about a 45 minute walk from the Pier. We highly recommend this lovely walk out to this point of the island. From its location you can see stunning views of the surrounding Clare Coastline. You can also see the magnificent Cliffs of Moher from a vantage point that is truly unique and only those on Inisheer can enjoy. You may want to read more about what to see on Inisheer.